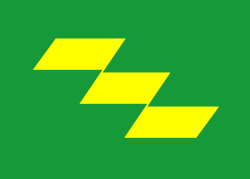 Miyazaki Prefecture (宮崎県code: ja is deprecated , Miyazaki-ken) is a prefecture in the Kyūshū region of Japan on the island of Kyushu. The capital city is Miyazaki.

After the Meiji Restoration, the area of Hyūga Province was renamed Miyazaki Prefecture.

Miyazaki is famous for various foods such as meat and fruit.

Miyazaki Prefecture is on the eastern coast of the island of Kyūshū. The southeast coastline faces the Pacific Ocean. Ōita Prefecture is north of Miyazaki. Kumamoto and Kagoshima Prefectures are to the west.

National parks are established in about 12% of the total land area of the prefecture.

Miyazaki is one of only two locations on Earth where the fungus Chorioactis geaster lives.

Tsuno jinja is the main Shinto shrine (ichinomiya) in the prefecture.

All content from Kiddle encyclopedia articles (including the article images and facts) can be freely used under Attribution-ShareAlike license, unless stated otherwise. Cite this article:
Miyazaki Prefecture Facts for Kids. Kiddle Encyclopedia.