Ōtsu is the capital and largest city of Shiga Prefecture, with other major cities including Kusatsu, Nagamhama, and Higashiōmi. Shiga Prefecture encircles Lake Biwa, the largest freshwater lake in Japan, and 37% of the total land area is designated as Natural Parks, the highest of any prefecture. Shiga Prefecture's southern half is located adjacent to the former capital city of Kyoto and forms part of Greater Kyoto, the fourth-largest metropolitan area in Japan. Shiga Prefecture is home to Ōmi beef, the Eight Views of Ōmi, and Hikone Castle, one of four national treasure castles in Japan.

Shiga used to be called Ōmi Province or Gōshū before Japan began using the prefectural system.

Lake Biwa is at the center of this prefecture. The lake divides the prefecture into four areas:

Cities in Shiga Prefecture include

National Parks are established in about 37% of the total land area of the prefecture. 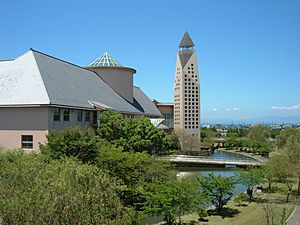 There are ten universities, two junior colleges, and a learning center of The Open University of Japan in Shiga.

Shiga has agreements with three states.

Takebe jinja is the chief Shinto shrine (ichinomiya) in the prefecture.

All content from Kiddle encyclopedia articles (including the article images and facts) can be freely used under Attribution-ShareAlike license, unless stated otherwise. Cite this article:
Shiga Prefecture Facts for Kids. Kiddle Encyclopedia.