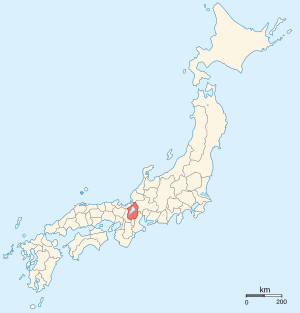 The ancient capital city of the province was near Ōtsu. 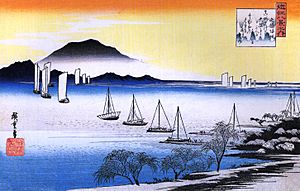 This ukiyo-e by Hiroshige illustrates the sailboats at Yahashi, one of the Eight Views of Ōmi, circa 1834

In the Kamakura period, Hōjō Tokimasa was made daimyo of Ōmi in 1200 (Shōji 2).

In the Sengoku Period, the northern part of the province was the fief of Ishida Mitsunari. After the Battle of Sekigahara, Ōmi was controlled by the Ii clan who built the castle and town of Hikone.

In the Edo period, the Tōkaidō road was the main route between the Imperial capital at Kyoto and the main city of the Tokugawa Shogunate. The road passed through Ōmi.

Eight of the 69 Stations of the Nakasendō were in Ōmi.

In the Meiji period, the provinces of Japan were converted into prefectures. The maps of Japan and Ōmi Province were reformed in the 1870s.

Takebe taisha was the chief Shinto shrine (ichinomiya) of Ōmi.

Enryaku-ji is one of the most important Buddhist centers. The monastery is on Mount Hiei (Hieizan).

All content from Kiddle encyclopedia articles (including the article images and facts) can be freely used under Attribution-ShareAlike license, unless stated otherwise. Cite this article:
Ōmi Province Facts for Kids. Kiddle Encyclopedia.