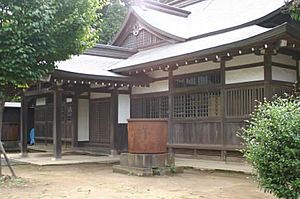 Kashima-jingū (鹿島神宮), also known as Kashima-jinja, is a Japanese Shinto shrine in Kashima, Ibaraki on the island of Honshu.

Kashima was the chief Shinto shrine (ichinomiya) of the old Hitachi Province. It serves today as one of the ichinomiya of Ibaraki Prefecture. This place is special to the kami named Takemikazuchi no ookami (武甕槌大神).

In the modern system of ranked Shinto Shrines, Kashima was listed in the middle range of ranked Imperial shrines or Kanpei-chūsha (官幣中社) which included 23 sanctuaries.

All content from Kiddle encyclopedia articles (including the article images and facts) can be freely used under Attribution-ShareAlike license, unless stated otherwise. Cite this article:
Kashima-jingū Facts for Kids. Kiddle Encyclopedia.