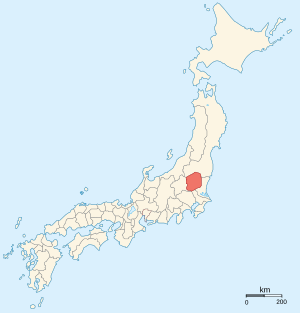 Shimotsuke Province (下野国, Shimotsuke-no kuni) is an old province of Japan in the area of Tochigi Prefecture on the island of Honshū. It was sometimes called Yashū (野州) or Shimotsuke-shū (下野州).

The ancient capital city of the province was near Tochigi.

Tokugawa Ieyasu's tomb and shrine is at Nikkō, in Shimotsuke. 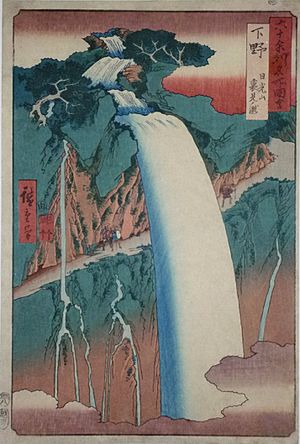 In the Nara period, Shimotsuke was part of Keno Province. This was changed in the reforms of the Taihō Code in 701.

Parts of Shimotsuke were held by a several daimyo during the Sengoku period.

In the Meiji period, the provinces of Japan were converted into prefectures. Maps of Japan and Shimotsuke Province were reformed in the 1870s.

Futarasan jinja was the chief Shinto shrine (ichinomiya) of Shimotsuke.

All content from Kiddle encyclopedia articles (including the article images and facts) can be freely used under Attribution-ShareAlike license, unless stated otherwise. Cite this article:
Shimotsuke Province Facts for Kids. Kiddle Encyclopedia.