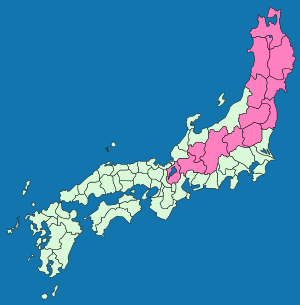 Tosandō (note that this map depicts the provinces near the end of the official status of provinces).

Tōsandō (東山道) is a Japanese term for both an ancient division of the country and the main road running through the region.

Tōsandō was one of the main circuits of the Gokishichidō system. It was first established during the Asuka period. Over centuries, the government functions of the Gokishichido became less important. However, the traditional eight regions, including Tōsandō, remained cultural markers.

Tōsandō is in the central mountains of northern Honshū. It is made of eight ancient provinces, including

After 711, Tōsandō was understood to include Musashi province.

The lands of many prefectures are in the region of Tōsandō: Akita, Aomori, Fukushima, Fiu, Gunma, Iwate, Miyagi, Nagano, Shiga and Tochigi prefectures.

All content from Kiddle encyclopedia articles (including the article images and facts) can be freely used under Attribution-ShareAlike license, unless stated otherwise. Cite this article:
Tōsandō Facts for Kids. Kiddle Encyclopedia.