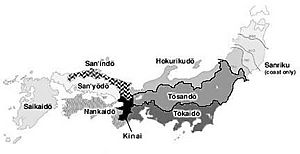 Gokishichidō (五畿七道code: ja is deprecated , literally, five provinces and seven circuits) was the name for ancient regions of Japan starting in the Asuka period. Imperial government of Japan was divided into large regions made up of several provinces.

Main page: Comparison of past and present administrative divisions of Japan

Under the Gokishichido system, the central provinces were considered to be a core region. These lands are called the Kansai region or Kinki or Kinai. The five provinces included:

Under the Gokishichido system, there were seven roads which connected the imperial capital with all of the provincial capitals. The land around each of the roads was called by the same name as the road, including

Traditional regions in the context of modern prefectures.

All content from Kiddle encyclopedia articles (including the article images and facts) can be freely used under Attribution-ShareAlike license, unless stated otherwise. Cite this article:
Gokishichidō Facts for Kids. Kiddle Encyclopedia.