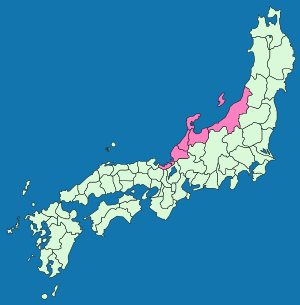 Hokurikudō (北陸道, Hokurikudō) is a Japanese term for an ancient division of the country and the main road running through the region.

Hokurikudō was one of the main circuits of the Gokishichidō system. It was first established during the Asuka period. Over centuries, the government functions of the Gokishichido became less important. However, the traditional eight regions, including Hokurikudō, remained cultural markers.

The Hokurikudō road connected the capitals of the provinces in this region.

When the Gokishichidō system was initially established after the Taika reforms, the region consisted of just two provinces: Wakasa and Koshi. During the reign of Emperor Temmu, Koshi was divided into three provinces: Echizen, Etchū and Echigo and Sado Island was added as a fifth province. Later, Noto and Kaga were carved out of Echizen.

All content from Kiddle encyclopedia articles (including the article images and facts) can be freely used under Attribution-ShareAlike license, unless stated otherwise. Cite this article:
Hokurikudō Facts for Kids. Kiddle Encyclopedia.