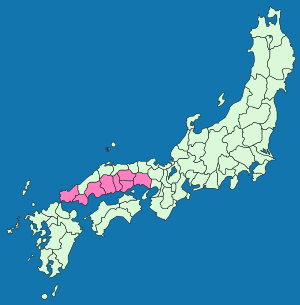 San'yōdō (山陽道code: ja is deprecated ) is a Japanese term for both an ancient division of the country and the main road running through the region.

San'yōdō was one of the main circuits of the Gokishichidō system. It was first established during the Asuka period. Over centuries, the government functions of the Gokishichido became less important. However, the traditional eight regions, including San'yōdō, remained cultural markers.

San'yōdō is the southern part of southern Honshū. The region is on the Seto Inland Sea. It has includes eight ancient provinces, including

The lands of four prefectures is in the region of San'yōdō: Hiroshima, Hyōgo, Okayama and Yamaguchi.

The modern national highway, Route 2, the San'yō Expressway, and the San'yō Main Line of the West Japan Railway Company, follow the approximate route of the San'yōdō.

All content from Kiddle encyclopedia articles (including the article images and facts) can be freely used under Attribution-ShareAlike license, unless stated otherwise. Cite this article:
San'yōdō Facts for Kids. Kiddle Encyclopedia.