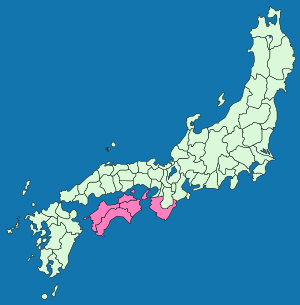 The Nankaidō (南海道code: ja is deprecated , literally, "southern sea road") is a Japanese term for both an ancient division of the country and the main road running through the region.

Nankaidō was one of the main circuits of the Gokishichidō system. It was first established during the Asuka period. Over centuries, the government functions of the Gokishichido became less important. However, the traditional eight regions, including Nankaidō, remained cultural markers.

The Nankaidō road connected the capitals of the provinces in this region.

Nankaidō is the geographic region of Shikoku. Awaji Island was also part of the region.

Nankaidō has parts of six ancient provinces and one island, including: 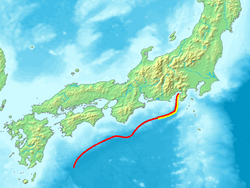 The yellow line is the "Suruga trough", part of the longer "Nankai trough" in red

Some geological features, such as the undersea Nankai Trough, have been named for the region.

Many historic earthquakes have the name "Nankai" or "Nankaido". Major earthquakes are named with the Japanese era name and the location such as Nankaido.

All content from Kiddle encyclopedia articles (including the article images and facts) can be freely used under Attribution-ShareAlike license, unless stated otherwise. Cite this article:
Nankaidō Facts for Kids. Kiddle Encyclopedia.