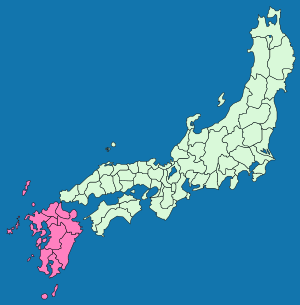 Saikaidō (西海道, literally, "western sea circuit") is a Japanese term for both an ancient division of the country and the main road running through the region.

Saikaidō was one of the main circuits of the Gokishichidō system. It was first established during the Asuka period. Over centuries, the government functions of the Gokishichido became less important. However, the traditional eight regions, including Saikaidō, remained cultural markers.

The Saikaidō road connected the capitals of the provinces in this region.

Saikaidō is the geographic region of Kyūshū. Tsushima Island and Iki Province were also part of the region.

Saikaidō has nine ancient provinces and two islands, including

Historic earthquakes are named "Saikaidō" when the main damage was in the Kyūshū region. Often quakes are called by the Japanese era name along with region location such as Saikaido.

All content from Kiddle encyclopedia articles (including the article images and facts) can be freely used under Attribution-ShareAlike license, unless stated otherwise. Cite this article:
Saikaidō Facts for Kids. Kiddle Encyclopedia.