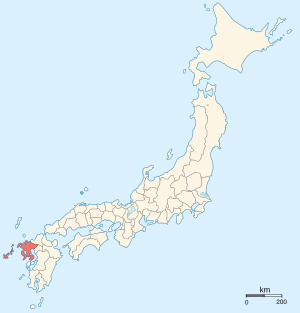 Hizen Province (肥前国, Hizen no kuni) was an old province of Japan in the area of Saga Prefecture and Nagasaki Prefecture on the island of Kyūshū. Along with Higo Province, it was sometimes called Hishū (肥州).

Hizen had borders with the provinces of Chikuzen and Chikugo.

The ancient capital city of the province was near Saga. 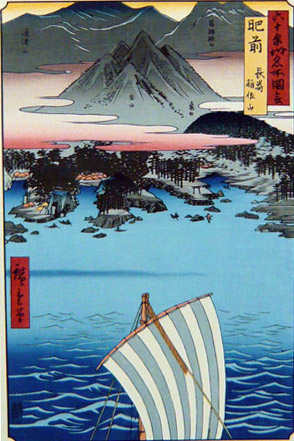 The name "Hizen" dates from the Nara Period, when the province was divided from Higo Province. The name appears in the Shoku Nihongi.

In the Meiji period, the provinces of Japan were converted into prefectures. Maps of Japan and Hizen Province were reformed in the 1870s.

Kawakami jinja and Chiriku Hachiman-gū were the chief Shinto shrines (ichinomiya) of Hizen.

All content from Kiddle encyclopedia articles (including the article images and facts) can be freely used under Attribution-ShareAlike license, unless stated otherwise. Cite this article:
Hizen Province Facts for Kids. Kiddle Encyclopedia.