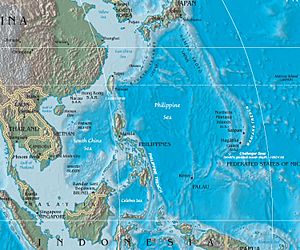 Saikaidō Seamounts are an underwater feature in the Philippine Sea. The seamounts are in the northern end of the Kyushu-Palau Ridge (KPR). The seabed ridge begins in an area about 900 km from the eastern end of the Bungo Channel (豊後水道code: ja is deprecated , Bungo Suidō) or "Bungo strait" between the Japanese islands of Kyushu and Shikoku. The ridge creates a line on the ocean floor which runs southwest in the direction of the island of Palau. There is a chain of extinct volcanos on this line.

The Saikaidō underwater mountain chain is southeast of the Japanese island of Kyushu.

This seabed feature is named after Saikaidō, which was the name given to the southern region of Japan during the Asuka period.

Each of these seamounts is an submarine, extinct volcano. The undersea mountain range includes:

All content from Kiddle encyclopedia articles (including the article images and facts) can be freely used under Attribution-ShareAlike license, unless stated otherwise. Cite this article:
Saikaidō Seamounts Facts for Kids. Kiddle Encyclopedia.