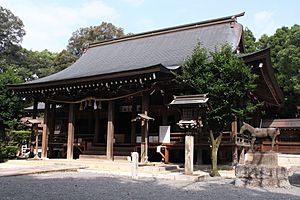 Chiriku Hachiman-gū was the chief Shinto shrine (ichinomiya) of Hizen Province. It is a chief shrine of Saga Prefecture and Nagasaki Prefecture.

In 1940, the shrine was recognized in the system of State Shinto. It was among the ranked, nationally significant shrines or Kokuhei Shōsha (国幣小社code: ja is deprecated ) which included 50 sanctuaries.

All content from Kiddle encyclopedia articles (including the article images and facts) can be freely used under Attribution-ShareAlike license, unless stated otherwise. Cite this article:
Chiriku Hachiman-gū Facts for Kids. Kiddle Encyclopedia.