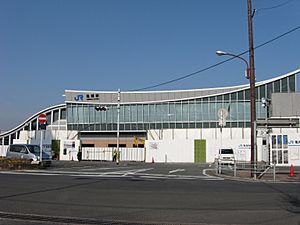 Kameoka (亀岡市, Kameoka-shi) is a Japanese city in Kyoto Prefecture. It is in western Kyoto in a wide, flat valley.

Kameoka city was built around a castle. It is in a rural area.

The population of Kameoka city is about 90,000 people.

Special products found in Kameoka include Botan nabe and Matsutake.

The Kameoka festival is held in the city from October 23rd to 25th every year. It is called the Gion Festival in Tamba, or Fall festival in Kameoka.

All content from Kiddle encyclopedia articles (including the article images and facts) can be freely used under Attribution-ShareAlike license, unless stated otherwise. Cite this article:
Kameoka, Kyoto Facts for Kids. Kiddle Encyclopedia.