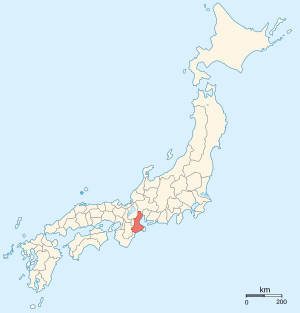 Ise Province (伊勢国code: ja is deprecated , Ise no kuni) was an old province of Japan in the area of modern Mie Prefecture on the island of Honshū.

The province had borders with Iga, Kii, Mino, Ōmi, Owari, Shima, and Yamato.

When the province was created in 646, its capital city was Uji-Yamada. 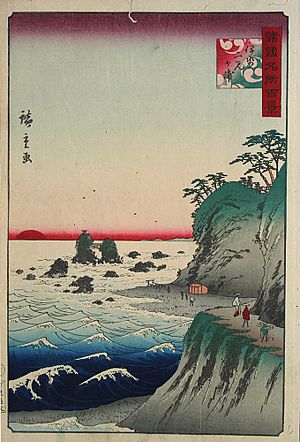 Before Nara period, Ise Shrine, the holiest Shinto shrine is established in this Province and here is introduced by a word Kamukaze in waka rhetorics in Nara periode. In the Edo period, the Tōkaidō road was the main route between the Imperial capital at Kyoto and the main city of the Tokugawa Shogunate. The road passed through Ise.

In the Meiji period, the provinces of Japan were converted into prefectures. The maps of Japan and Ise Province were reformed in the 1870s.

The World War II Japanese battleship Ise was named after this province.

All content from Kiddle encyclopedia articles (including the article images and facts) can be freely used under Attribution-ShareAlike license, unless stated otherwise. Cite this article:
Ise Province Facts for Kids. Kiddle Encyclopedia.