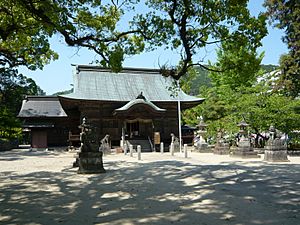 Yodohime jinja was founded in the sixth century. It enshrines the kami of the grandmother of Emperor Jimmu.

It was one of two chief Shinto shrine (ichinomiya) of Hizen Province and Saga Prefecture.

All content from Kiddle encyclopedia articles (including the article images and facts) can be freely used under Attribution-ShareAlike license, unless stated otherwise. Cite this article:
Yodohime jinja Facts for Kids. Kiddle Encyclopedia.