Emperor Junnin (淳仁天皇code: ja is deprecated , Junnin-tennō, 733–10 November 765) was the 47th emperor of Japan, according to the traditional order of succession. His reign started in 758 and ended in 764.

Before he became the monarch, this prince's personal name (imina) was Ōi-shinnō (Ōi-no-ō). The posthumous name of Emperor Junnin was given by Emperor Meiji.

He was the seventh son of Prince Toneri, a son of Emperor Temmu. His father died when he was at the age of three, and he was given no rank nor office of the court.

In the older Japanese documents, he was often referred as the "unthroned emperor" (廃帝code: ja is deprecated , Haitei).

His fate was changed in 757 when Empress Kōken named him as her heir (crown prince).

Junnin caused grain storage centers (Jōheisō) to be established in the provinces. The government stored rice from the years of good harvests. This rice was used to control higher prices when harvests of rice were not good. The Jōheisō were abolished during the Kamakura period. 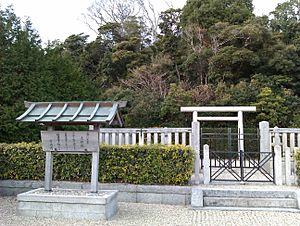 The mausoleum (misasagi) of Emperor Junnin in Awaji Province.

The actual site of Junnin's grave is known. This emperor is traditionally venerated at a memorial Shinto shrine (misasagi) at Awaji.

The Imperial Household Agency designates this location as Junnin's mausoleum. It is formally named Awaji no misasagi.

In 1870, Emperor Meiji conferred the posthumous name and title by which he is now known.

The years of Junnin's reign are identified by a single era name.

All content from Kiddle encyclopedia articles (including the article images and facts) can be freely used under Attribution-ShareAlike license, unless stated otherwise. Cite this article:
Emperor Junnin Facts for Kids. Kiddle Encyclopedia.