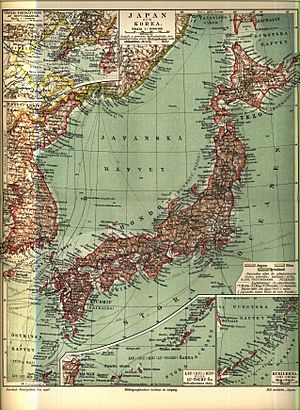 Swedish map of Japan (c. 1900) with the Yezo region featured.

Ezo (蝦夷code: ja is deprecated ), also known as Yezo or Yeso, is an ancient Japanese name for the lands to the north of Japan. It was the name of the northern Japanese island of Hokkaidō. It was also used as a name for islands in the Sea of Okhotsk, including the Kurile Islands and Sakhalin. 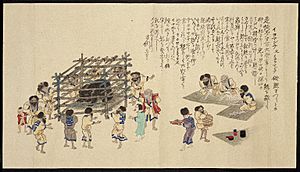 The first published description of Ezo in the West was brought to Europe by Isaac Titsingh in 1796. His small library of Japanese books included Sangoku Tsūran Zusetsu (三国通覧図説code: ja is deprecated , An Illustrated Description of Three Countries) by Hayashi Shihei. This book, which was published in Japan in 1785, described the Ezo region and people.

All content from Kiddle encyclopedia articles (including the article images and facts) can be freely used under Attribution-ShareAlike license, unless stated otherwise. Cite this article:
Ezo Facts for Kids. Kiddle Encyclopedia.