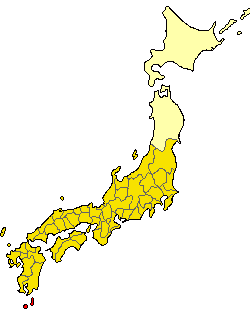 Tane Province (多禰国code: ja is deprecated , Tane-no kuni) was an island province of Japan in the area of Kagoshima Prefecture on the island of Kyūshū. The history of the province started in 674 and ended in 824.

Kofun burial mounds are found on Tanegashima. Two very old Shinto shrines on Yakushima suggest that these islands were the southern border of the Yamato state.

Annals of the Nara period regard Tane-no-kuni as the name for all the Ryukyu Islands, including Tanegashima and Yakushima. 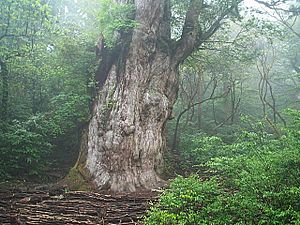 All content from Kiddle encyclopedia articles (including the article images and facts) can be freely used under Attribution-ShareAlike license, unless stated otherwise. Cite this article:
Tane Province Facts for Kids. Kiddle Encyclopedia.