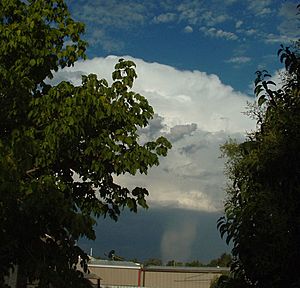 The most frequent is contact convection. The sun is shining on the surface. It gets warmer and warmer. This leads to vertical draft, that is spontaneous rising and downward motions. This warm air has higher temperature than its neighborhood. Warmer air has lower density than cold air. Warm air rises. Through this rising motion the air element decelerates because of friction. This trend stops when the temperature of this element is equal to the temperature of surrounding air. Next rising continues due to inertia

These thermal motions are used for example in gliding. The Thermal flow has enough energy to bring gliders to higher altitude.

All content from Kiddle encyclopedia articles (including the article images and facts) can be freely used under Attribution-ShareAlike license, unless stated otherwise. Cite this article:
Atmospheric convection Facts for Kids. Kiddle Encyclopedia.