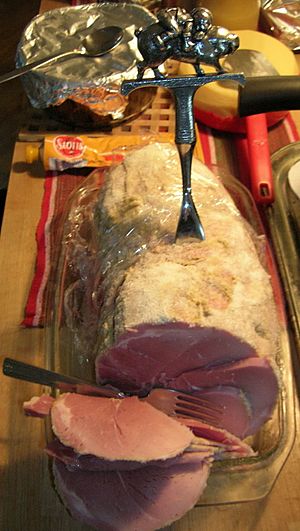 A Christmas ham or Yule ham is a ham often served for Christmas dinner in Northern Europe and the Anglosphere. The style of preparation varies widely by place and time.

It is said that the tradition of eating ham evolved from the Germanic pagan ritual of sacrificing a wild boar known as a sonargöltr to the Norse god Freyr during harvest festivals. The Christian adoption of this tradition stems from St Stephen's Day.

The centerpiece of the cold cuts section of a traditional Swedish Christmas smörgåsbord (at Christmas called "julbord") is a large Christmas ham (a cured ham which has been boiled or baked, then coated with a mixture of egg, breadcrumbs and mustard, browned in the oven).

In the United States, the way in which the ham is made is variant, and especially often vary by region or by ancestral background. Stuffed ham is popular in southern Maryland, and particularly St. Mary's County, where it is traditional to stuff a corned ham with greens such as kale and cabbage. This tradition has been around in the area for at least 200 years. Similar stuffed hams are also sometimes prepared in Kentucky. One tradition from the US South includes preparing a ham with a brown sugar glaze. Americans purchase an estimated 318 million pounds of ham around the holiday season, competitive with Christmas turkey. 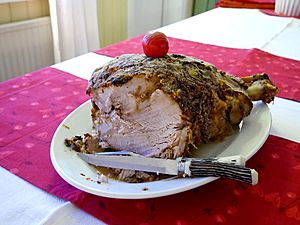 Ham is a traditional Australian dish that features on most tables on Christmas Day. It is cooked and served in various ways throughout Australia, with many families adding special ingredients, making it an important aspect of a Christmas meal.

As Christmas in Australia comes at the beginning of summer, many people no longer serve a traditional hot roast dinner, serving cold turkey and ham, seafood and salads instead. Christmas ham leftovers are often frozen to make soup and other dishes when the summer is over.

In the Philippines and among diaspora groups such as Filipino-Americans, a ham is prepared for Christmas celebrations. The ham is referred to as a hamón, from the Spanish word for "ham", jamón. The hamón is sometimes soaked in kumquat and lime juice. It is similar to, but not to be confused for, hamonado, which is another Filipino dish that can include pork and is also served around the Christmas season.

All content from Kiddle encyclopedia articles (including the article images and facts) can be freely used under Attribution-ShareAlike license, unless stated otherwise. Cite this article:
Christmas ham Facts for Kids. Kiddle Encyclopedia.