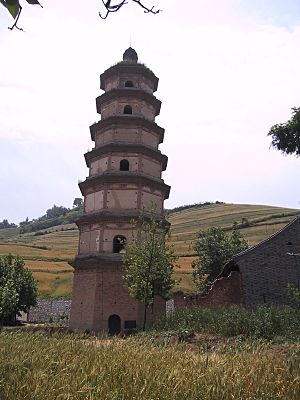 The Daqin Pagoda, part of an early Nestorian church in what was then Chang'an, now Xi'an, China, built during the Tang dynasty (618-907 AD)

Nestorianism is a movement within Christianity. The idea behind the doctrine was that there were two different persons of Jesus. One of them was the man Jesus, the other was the aspect of son of God, or Logos. Perhaps the most prominent supporter of the idea was Nestorius, archbishop of Constantinople. Nestorius lived from about 380 to about 450 AD. The Council of Ephesus condemned this view in 431. This led to a split of the church, into the Assyrian Church of the East and the Byzantine Church.

For this reason, the Assyrian Church of the East is sometimes called Nestorian. The church holds the view that Chist has two essences (qnome) that are united in one person (parsopa).

All content from Kiddle encyclopedia articles (including the article images and facts) can be freely used under Attribution-ShareAlike license, unless stated otherwise. Cite this article:
Nestorianism Facts for Kids. Kiddle Encyclopedia.