Kids Encyclopedia Facts
This page is about the capital of ancient China. For other uses, see Chang'an (disambiguation). 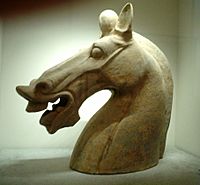 A terracotta horse head from the Han Dynasty.

Chang'an was the capital of ancient China of more than ten dynasties in Chinese history. Chang'an literally means "Perpetual Peace" in Classical Chinese. During the Xin Dynasty, the city was renamed "Constant Peace"; yet after its fall in the year 23 AD, the old name was restored. During the Ming Dynasty, the name was changed to its present name Xi'an, meaning "Western Peace".

The imperial city of Chang'an during the Han Dynasty was in northwest of today's Xi'an. During the Tang Dynasty, the area to be known as Chang'an included the area inside the Ming Xi'an fortification, plus some small areas to its east and west, and a major part of its southern suburbs. The Tang Chang'an was 8 times the size of the Ming Xi'an. During this time Chang'an was one of the largest and most populous cities in the world. Around 750 A.D. Chang'an was called a "million people's city" in Chinese records, while modern estimates put it at around 800,000–1,000,000 within city walls.

In 710, the grid of Japan's capital city at Heijō-kyō was planned to mirror the grid of Chang'an. In 794, the plan of the new capital at Heian-kyō also mirrored the Chang'an design.

All content from Kiddle encyclopedia articles (including the article images and facts) can be freely used under Attribution-ShareAlike license, unless stated otherwise. Cite this article:
Chang'an Facts for Kids. Kiddle Encyclopedia.