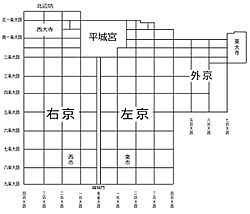 Heijō-kyō (Japanese: 平城京, also known as Heizei-kyō) was twice the ancient Imperial capital of Japan from 710 to 784. It was where Nara is today.

In 710, Empress Gemmei moved the Imperial capital from Fujiwara-kyō which is about 18 km south.

The Heijō Palace and some of the Buddhist temples at Heijō-kyō are named together as a UNESCO World Heritage Site, including

All content from Kiddle encyclopedia articles (including the article images and facts) can be freely used under Attribution-ShareAlike license, unless stated otherwise. Cite this article:
Heijō-kyō Facts for Kids. Kiddle Encyclopedia.