Capital of Japan facts for kids 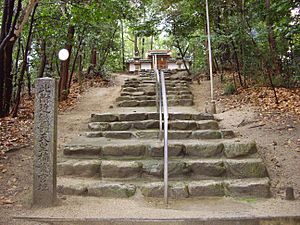 This article is about the Japanese national capital in general. For the current capital, see Tokyo.

The capital of Japan is Tokyo. In the course of history, the national capital has been in many locations other than Tokyo.

In 1941, the Ministry of Education published the "designation of Tokyo as capital" (東京奠都code: ja is deprecated , Tōkyō-tento).

After World War II, the new Constitution of Japan transferred the state's sovereignty from the Emperor to the people. The people of Japan are represented by the Diet of Japan in Tokyo. Consensus considers the site of the Diet is the capital of Japan.

No law makes Tokyo as the Japanese capital. However, many laws have defined a "capital area" (首都圏code: ja is deprecated , shutoken) which incorporates Tokyo.

Article 2 of the Capital Area Consolidation Law (首都圏整備法code: ja is deprecated ) of 1956 states that

"In this Act, the term 'capital area' shall denote a broad region comprising both the territory of Tokyo Metropolis as well as outlying regions designated by cabinet order."

This list of legendary capitals of Japan begins with the reign of Emperor Jimmu. The names of the Imperial palaces are in parentheses.

This list of capitals includes the Imperial palaces names in parentheses.

All content from Kiddle encyclopedia articles (including the article images and facts) can be freely used under Attribution-ShareAlike license, unless stated otherwise. Cite this article:
Capital of Japan Facts for Kids. Kiddle Encyclopedia.