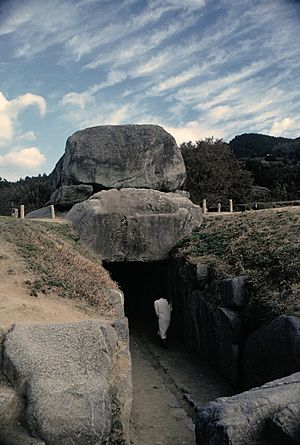 Asuka (飛鳥code: ja is deprecated ) was an ancient Imperial capital of Japan during the 6th and 7th centuries. It was in Yamato Province, which is present-day Nara Prefecture. 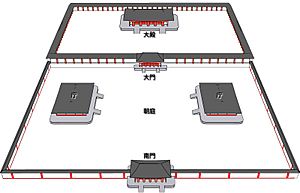 When Asuka was Japan's capital, new palaces were constructed for each new monarch. Sometimes Imperial palaces were abandoned because of fires or bad omens.

According to tradition, Asuka was the site of Chikatsu-Asuka-Yatsuri Palace during the reign of Emperor Kenzo

In 640-642, the court briefly moved to Kōryō and the Kudara Palace (Kudara-no-miya); then the court returned to Asuka at the Itabuki Palace (Itabuki no miya), 643–645

In 667-672, the emperor moved to the Ōmi Ōtsu Palace (Ōmi Ōtsu-no-miya) in Ōmi-kyō which is today called Ōtsu in Shiga Prefecture.

Asuka was abandoned when Empress Jitō moved the court and the capital to Fujiwara-kyō.

All content from Kiddle encyclopedia articles (including the article images and facts) can be freely used under Attribution-ShareAlike license, unless stated otherwise. Cite this article:
Asuka, Yamato Facts for Kids. Kiddle Encyclopedia.