Empress Jitō (持統天皇, Jitō-tennō, 645 – December 22, 702) was the 41st Emperor of Japan, according to the traditional order of succession.

Jitō's reign started in 686 and ended in 697. Historians consider details about the life of Empress Jitō to be possibly legendary, but probable. The name Jitō-tennō was created for him posthumously by later generations.

The conventionally accepted names and sequence of the early emperors were not to be confirmed as "traditional" until the reign of Emperor Kammu, who was the 50th monarch of the Yamato dynasty.

In the history of Japan, Jitō was the third of eight women to be empress. The two female monarchs before Jitō were (a) Suiko and (b) Kōgyoku/Saimei. The five women monarchs after Jitō were (c) Gemmei, (d) Genshō, (e) Kōken/Shōtoku, (f) Meishō, and (g) Go-Sakuramachi.

Princess Uno was the daughter of Emperor Tenji and she was the wife of Emperor Temmu, who was Tenji's brother.

In this period, the court and the government was centered at Fujiwara Palace in Yamato. 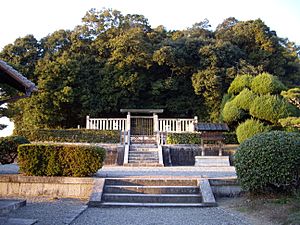 The actual site of Jitō's grave is known. This empress is traditionally venerated at a memorial Shinto shrine (misasagi) at Nara.

The Imperial Household Agency designates this location as Jitō's mausoleum. It is formally named Ochi-no-Okanoe no misasagi.

After the death of the Emperor Temmu
Oh, the autumn foliage
Of the hill of Kamioka!
My good Lord and Sovereign
Would see it in the evening
And ask of it in the morning.
On that very hill from afar
I gaze, wondering
If he sees it to-day,
Or asks of it to-morrow.
Sadness I feel at eve,
And heart-rending grief at morn --
The sleeves of my coarse-cloth robe
Are never for a moment dry.

All content from Kiddle encyclopedia articles (including the article images and facts) can be freely used under Attribution-ShareAlike license, unless stated otherwise. Cite this article:
Empress Jitō Facts for Kids. Kiddle Encyclopedia.