Emperor Tenji (天智天皇code: ja is deprecated , Tenji-tennō, 626 – January 7, 671), also known as Emperor Tenchi, was the 38th Emperor of Japan, according to the traditional order of succession. His reign started in 661 and ended in 671.

He was the son of Emperor Jomei.

Prince Naka no Ōe was made heir apparent and Crown Prince in 661.

Prince Ōtomo (Ōtomo-shinnō) was the favorite son of Emperor Tenji; and he was also the first to be accorded the title of Daijō-daijin. 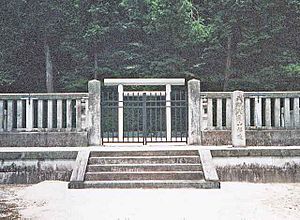 Tenji improved the military forces which had been established during the Taika reforms.

The actual site of Tenji's grave is known. This emperor is traditionally venerated at a memorial Shinto shrine (misasagi) at Yamashina-ku, Kyoto.

The Imperial Household Agency designates this location as Tenji's mausoleum. It is formally named Yamashina no misasagi.

All content from Kiddle encyclopedia articles (including the article images and facts) can be freely used under Attribution-ShareAlike license, unless stated otherwise. Cite this article:
Emperor Tenji Facts for Kids. Kiddle Encyclopedia.