Empress Suiko (推古天皇code: ja is deprecated , Suiko-tennō) (554–628) was the 33rd Emperor of Japan, according to the traditional order of succession. Her reign started in 593 and ended in 628. Historians consider details about the life of Empress Suiko to be possibly legendary, but probable. The name Suiko-tennō was created for her posthumously by later generations.

The conventionally accepted names and sequence of the early emperors were not to be confirmed as "traditional" until the reign of Emperor Kammu, who was the 50th monarch of the Yamato dynasty.

Suiko was also a wife of Emperor Bidatsu.

When Suiko became empress, she ended a power struggle for the throne after the deaths of emperors who were her brothers.

Prince Shōtoku was the most important man in Suko's court.

In 599, an earthquake destroyed buildings in Yamato province which is now known as Nara Prefecture.

The reign of this empress was marked by the opening of relations with the Sui court in 600.

The use of the Sexegenary cycle calendar (Jikkan Jūnishi) in Japan is credited to Empress Suiko in 604. 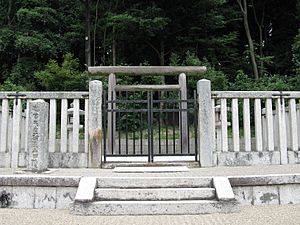 Suiko died in 628. This empress' official name after her death (her posthumous name) was regularized only after death. Her reign name means "to reason from antiquity."

The actual site of Suiko's grave is known. This empress is traditionally venerated at a memorial Shinto shrine (misasagi) at Osaka.

The Imperial Household Agency designates this location as Suiko's mausoleum. It is formally named Shinaga no Yamada no misasagi.

All content from Kiddle encyclopedia articles (including the article images and facts) can be freely used under Attribution-ShareAlike license, unless stated otherwise. Cite this article:
Empress Suiko Facts for Kids. Kiddle Encyclopedia.