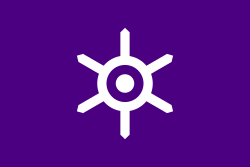 This article is about metropolitan Tokyo. For more information, see Tokyo (disambiguation).

Greater Tokyo includes land in the Kantō region and also the Izu Islands and Ogasawara Islands. Ten percent (10%) of the Japanese people live in Tokyo, and as many as twenty percent (20%) of the population live around it. As of 2007, the population was 12,790,000. Tokyo is in a part of Japan called the Kantō Plain. Two big rivers run through Tokyo. One is the Arakawa River which runs from the north to the south, and flows into Tokyo Bay. The other is the Tama River which runs from the west to the east. The Tama River is a border between Tokyo and its neighbor city, Kawasaki.

Tokyo has many outlying islands.

Two commercial airports serve Tokyo. Haneda Airport is in the city limits next to Tokyo Bay. This airport is mostly for domestic travel. Most international flights to and from Tokyo go through Narita International Airport in Chiba Prefecture, opened in 1978.

All content from Kiddle encyclopedia articles (including the article images and facts) can be freely used under Attribution-ShareAlike license, unless stated otherwise. Cite this article:
Tokyo Metropolis Facts for Kids. Kiddle Encyclopedia.