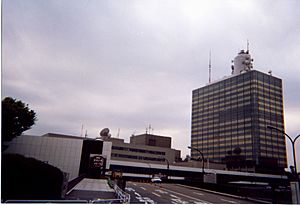 NHK, the Japan Broadcasting Corporation, is Japan's public broadcaster, like PBS in the United States. Its name is written as 日本放送協会 or Nippon Hōsō Kyōkai in Japanese.

NHK was founded in 1926, based on the BBC radio company in the United Kingdom. They began operating TV broadcasting in 1953. The first color broadcast was in 1960.

Everyone in Japan who owns a TV is asked to pay anywhere 15,720 or 27,360 (included satellite broadcasting) 円 per year to support NHK; there is a discount for lump sum payment.

NHK has lots of types of TV shows:

NHK has 500 staff members in the announcer division alone; but announcers that convey nationally important events and news are operated quite fixedly like Korean Central Television.

All content from Kiddle encyclopedia articles (including the article images and facts) can be freely used under Attribution-ShareAlike license, unless stated otherwise. Cite this article:
NHK Facts for Kids. Kiddle Encyclopedia.