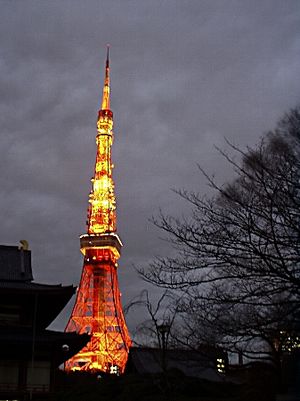 Tokyo Tower is 333 m (1093 ft) tall. It the world's highest self-supporting steel tower and the tallest structure in Tokyo.

The cost for lighting is about 24 thousand yen to 25 thousand yen a day. It seems to be two-tone of red and white, but actually the colors are international orange and white. The color cannot be changed to other colors because the color is decided by the law.

In 2009, the Tokyo Tower was recognized as one of the 100 Landscapes of Japan which best show contemporary Japan and its culture in the Heisei period.

All content from Kiddle encyclopedia articles (including the article images and facts) can be freely used under Attribution-ShareAlike license, unless stated otherwise. Cite this article:
Tokyo Tower Facts for Kids. Kiddle Encyclopedia.