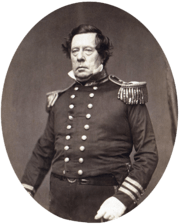 Matthew Calbraith Perry (April 10, 1794 – March 4, 1858) was a Commodore of the U.S. Navy and commanded a number of ships. He served in several wars, mostly known in the Mexican-American War and the War of 1812. He played a leading role in the opening of Japan to the West with the Convention of Kanagawa in 1854. Perry was very concerned with the education of naval officers and helped develop a system that helped the United States Naval Academy. With the advent of the steam engine, he became a leading advocate of modernizing the U.S. Navy and came to be considered The Father of the Steam Navy.

Perry was born on April 10, 1794 in Newport, Rhode Island. He was the younger brother of Commodore Oliver Hazard Perry, who commanded U.S. naval forces in the Battle of Lake Erie in the War of 1812. Matthew Perry was never married and had no children. Perry died on March 4, 1858 in New York City, New York from unknown causes. He was buried at Island Cemetery in Newport, Rhode Island.

All content from Kiddle encyclopedia articles (including the article images and facts) can be freely used under Attribution-ShareAlike license, unless stated otherwise. Cite this article:
Matthew C. Perry Facts for Kids. Kiddle Encyclopedia.