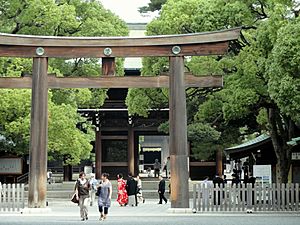 Meiji Shrine (明治神宮, Meiji Jingū) is a Japanese Shinto shrine in Tokyo. It honors the spirits of Emperor Meiji and his wife, Empress Shōken.

After the emperor's death in 1912, the Diet of Japan voted to commemorate his role in the Meiji Restoration.

The grounds of the shrine were finished by 1926. Trees in the park were donated by people from all parts of Japan.

Until 1946, the Meiji Shrine was in the highest rank of government supported shrines (官幣大社, Kanpei-taisha).

All content from Kiddle encyclopedia articles (including the article images and facts) can be freely used under Attribution-ShareAlike license, unless stated otherwise. Cite this article:
Meiji Shrine Facts for Kids. Kiddle Encyclopedia.