Battle of Ortona facts for kids

The Battle of Ortona was a small, very violent battle fought between German and Canadian troops. It was fought on December 20–28, 1943. It was part of World War II.

It was part of the fighting on the Adriatic area in Italy. The battle has been called "Little Stalingrad" because of the violent, close fighting. The battle took place in the Adriatic Sea town of Ortona, with a population of 10,000.

Ortona was one of Italy's few deep water ports on the east coast. The Allies wanted to capture the port. The Germans had constructed a series of defensive positions in the town. 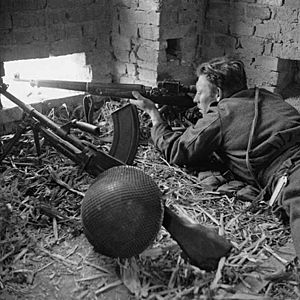 Canadian sniper at the Battle of Ortona

The Canadians had to battle the German 1st Parachute Division. These soldiers were experienced after many years of war. Adolf Hitler ordered them to defend Ortona.

The Canadian attack on the town was on December 20. The Germans had hidden machine guns and anti-tank guns in the town. This made it hard for Canadian tanks and infantry to move. The fighting was very violent. The soldiers fought for every house.

On 28 December, after eight days of fighting, the Germans withdrew from the town. The Canadians had 1,375 dead.

All content from Kiddle encyclopedia articles (including the article images and facts) can be freely used under Attribution-ShareAlike license, unless stated otherwise. Cite this article:
Battle of Ortona Facts for Kids. Kiddle Encyclopedia.