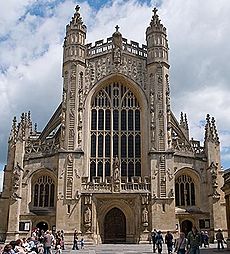 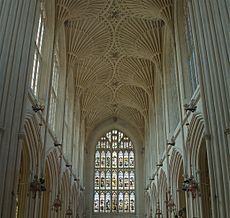 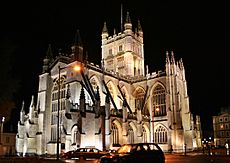 Bath Abbey, is an Anglican parish church and an old monastery in Bath, Somerset. Its full name is the Abbey Church of Saint Peter and Saint Paul, Bath. It was founded in the 7th century, reorganised in the 10th century, and rebuilt in the 12th and 16th centuries. It is one of the finest and largest examples of Gothic architecture (Perpendicular style) in the West of England.

The church is a former Benedictine monastery, and a former cathedral.

All content from Kiddle encyclopedia articles (including the article images and facts) can be freely used under Attribution-ShareAlike license, unless stated otherwise. Cite this article:
Bath Abbey Facts for Kids. Kiddle Encyclopedia.