Cremorne Point shares the postcode of 2090 with Cremorne, a separate suburb to the north. Cremorne Point sits on Sydney Harbour between Shell Cove and Mosman Bay. Cremorne Junction is a locality within the suburb of Cremorne.

Cremorne was named after the Cremorne Gardens in London, a popular pleasure ground in England, which derives from Gaelic words meaning 'boundary' and 'chieftain'. Robertsons Point was named after James Robertson who was granted 35 hectares there in 1820. He was the father of Premier Sir John Robertson.

James Milson Jnr (1814-1903), son of James Milson (1785-1872) who had owned much land in nearby Milsons Point, was a merchant and a pastoralist in NSW and Queensland. In time he greatly expanded the family's land holdings in the lower North Shore, including the 1853 purchase of the Cremorne peninsula. The sale of this land for residential blocks in the last years of the 19th and early years of the 20th centuries proved to be especially profitable. Much to Milson's disgust, the courts prevented him from selling building blocks running right to the water's edge and Cremorne is consequently one of the few Sydney Harbour peninsulas with a public, waterfront park running around its edges. The last of the family's holdings in the lower North Shore area were resumed in the early 1920s for the construction of the Harbour Bridge and associated roadways. 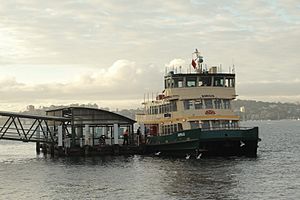 Cremorne Point Ferry Wharf being visited by a ferry.

Cremorne Point ferry wharf is served by Mosman Bay services located on the peninsula's south-west. It was partially sunk in storms on 9 June 2007 and operational again on 15 September 2007.

All content from Kiddle encyclopedia articles (including the article images and facts) can be freely used under Attribution-ShareAlike license, unless stated otherwise. Cite this article:
Cremorne Point Facts for Kids. Kiddle Encyclopedia.