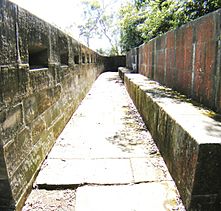 The main firing wall of the Bradleys Head Fortification Complex.

The Bradleys Head Fort is near Toronga Park Zoo. This fort was part of Sydney Harbour’s protection plan. It [the fort] remembers a time when the colony of New South Wales became more aware of its isolation and wealth. The fort is on Bradleys Head Road, Mosman, New South Wales, Australia.

They first started work to build the fort in 1840-42. It had a gun pit (special place for the cannon to sit and fire from) and firing wall (pictured in intro) that was built out of large blocks of sandstone and carved partly from the original rock that was already there. The first part of the building process around this time was done under the watchful eye of Major George Barney, a Commanding Royal Engineer who used hired workers provided by Governor Gipps.

In 1871 the fort got an extra barracks. The barracks were made from large sandstone blocks and carved out of the rock on the headland. This addition was the work of James Barnet, a colonial architect. This most recent add-on had three gun pits and had connecting walkways for the people in the army that worked there. The upgrade of 1871 was complementary to some of the larger fortifications being constructed during the same period. The site is now part of the Sydney Harbour Federation Trust.

All content from Kiddle encyclopedia articles (including the article images and facts) can be freely used under Attribution-ShareAlike license, unless stated otherwise. Cite this article:
Bradleys Head Fortification Complex Facts for Kids. Kiddle Encyclopedia.