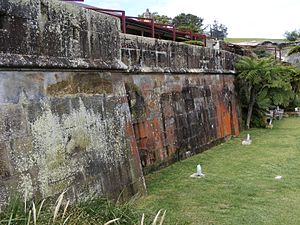 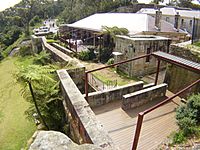 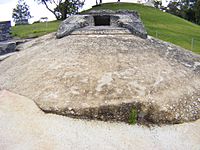 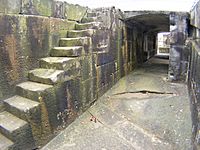 In one of the battery's trenches

The area where the fort is was once home to Aborigines that lived in the area for thousands of years and long before Europeans visited and decided to stay.

Georges Head fort was built in 1871 after the British Army decided to leave Australia in 1870. When they left the responsibility for protecting Sydney and Sydney Harbour was now in the hands of rich colonies like New South Wales and Victoria who now had to organise its own defences.

Georges Head was near the entrance to Sydney Harbour and was meant to attack baddies (foreign ships that are not friendlies) before they could get into the harbour. The fort was on a very good spot and was positioned high above sea level with clear views to the entrance of Port Jackson (Sydney Harbour/Sydney Heads). Other forts were also on Middle Head, South Head, Shark Point and Bradleys Head, but none were ever used for fighting ships or troops from other countrys.

Georges Head was armed with four 80 pounder cannons and two 68 pounder cannons. These cannons were 'muzzle-loading', which meant the cannonballs or bullets along with the explosive charge (T.N.T dynamite) were loaded into the front of the cannons barrel. It took three months and 250 soldiers to roll the gun barrels all the way from North Sydney to the forts. They came along a dirt road which later became Military Road. Once they were put in place, the cannons had been placed so close together that it created the risk of one cannon firing upon another. Also, the cannons and the men could be seen from ships in the harbour. In 1877 large mounds of earth were placed between the pits to make sure the guns neither could fire upon each other and to help protect the gun crew from enemy fire. When construction of the fort was finalised, there were a total of 41 gun emplacements around Sydney Harbour.

The planning of defence was planned using telescopes and plotters sitting in the middle of the second gun pit. From the telephone exchange, the Port Jackson District Commandant could talk with all the other forts around the harbour. Telephone wires ran through tunnels, down the cliff and under the harbour to forts on the other side. 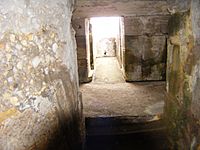 Inside the vast tunnel complex

Georges Head was later chosen as the best place to spy and fire mines which were laid underwater. In 1888 Georges Head battery was upgraded for the latest in harbour defences in the form of submarine bombs. Minefields were laid across the main shipping channels of Port Jackson from 1876 to 1922 and a base was built at Chowder Bay for the submarine miners. From Georges Head, miners watched for ships entering the harbour. Their job was to explode the mine closest to an approaching enemy ship. Each underwater mine was attached to an electric cable that ran up the cliff to the firing post.

The work of the submarine miner was secretive, technical and dangerous. During a demonstration in 1891, a crowd of several thousand watched as a terrible accident killed four miners and injured another eight.

All content from Kiddle encyclopedia articles (including the article images and facts) can be freely used under Attribution-ShareAlike license, unless stated otherwise. Cite this article:
Georges Head Battery Facts for Kids. Kiddle Encyclopedia.