St Leonards is a suburb on the lower North Shore of Sydney, in the state of New South Wales, Australia. St Leonards is located 5 km north-west of the Sydney central business district and lies across the local government areas of Municipality of Lane Cove, North Sydney Council and the City of Willoughby.

The oldest railway station on the North Shore line opened in 1890 in St Leonards and originally only ran to Hornsby.

The Gore Hill cemetery was established on the Pacific Highway in 1868 and was the main burial site for the area until its closure in 1975. It is still maintained as a heritage site by the Department of Local Government and Lands, Willoughby Municipal Council and the Heritage Council of New South Wales. 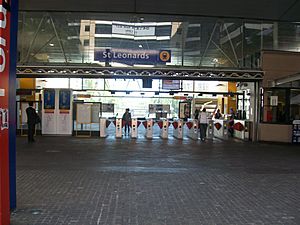 St Leonards railway station is on the North Shore, Northern & Western Line of the Sydney Trains network. The Pacific Highway is the major road through the suburb.

St Leonards has developed into somewhat of a home for Rugby Union with the headquarters of the Australian Rugby Union relocated to St Leonards in 2007, from neighbouring North Sydney. The Northern Suburbs Rugby Club has its clubhouse in St. Leonards, featuring the Cabana Bar and Lounge.

All content from Kiddle encyclopedia articles (including the article images and facts) can be freely used under Attribution-ShareAlike license, unless stated otherwise. Cite this article:
St Leonards, New South Wales Facts for Kids. Kiddle Encyclopedia.