Cammeray is a residential suburb located five kilometres north of the Sydney Central Business District (CBD) and is part of the North Sydney Council local government area. Cammeray is part of the Lower North Shore region of Northern Sydney.

Cammeray is named after the Cammeraygal, the Aboriginal tribe who once resided in the North Sydney area. Cammeray was the site of Sydney's first quarry, with sandstone blocks from the quarry making many of the first buildings in Sydney town.

Cammeray was for a time the home of Joseph Palmer Abbott, Australian politician and solicitor. Abbott built Tarella, a two-storey Italianate mansion in Amherst Street, c. 1886, on land he had acquired in 1881. Palmer Street in Cammeray was named after him. Tarella includes a coachhouse at the rear, with a distinctive clock tower. It is listed with the Heritage Council of New South Wales.

Amherst Street was named after William Pitt Amherst, who was Governor-General of India 1823-28. 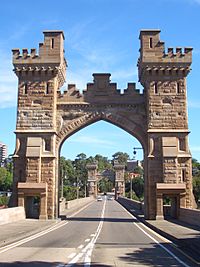 Cammeray is the last of the south-bound bus stops for services that operate via the Warringah Freeway to the Sydney central business district, although other south-bound services do travel to North Sydney, Milsons Point and Crows Nest. Long Gully Bridge, a sandstone bridge spanning Tunks Park that once carried trams to Northbridge in the early half of the 20th century, is located at the northern end of Cammeray. It is now a vital link to suburbs north of Cammeray, and is an easily recognised feature to people living in the surrounding area.

While there are also some older high rise apartment blocks in certain areas of Cammeray that were built several decades ago, the majority of residences are in the form of stand-alone or semi-detached, single or double-storey houses. Many of the quieter streets are lined with trees and have nature stips. This gives Cammeray a pleasant green look. Recently there have been many housing redevelopments in the heart of Cammeray Shopping Village. They take the form of low rise apartment blocks. 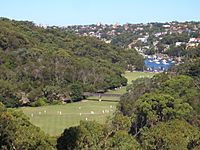 Tunks Park is a recreation area, popular among joggers and those wishing to walk their dogs. It also provides Cammeray with three sporting fields, notably cricket pitches during the summer, soccer, rugby league and union fields during the winter.

The Norths Pirates Junior Rugby Union Club, is Cammeray's local village rugby union team who play all home games at the western field of Tunks Park. The North Sydney Brothers, a junior rugby league club also have all their home games there as well as the rugby league teams of Marist College North Shore.

At the eastern edge of Tunks Park is a small boat ramp allowing small boats to enter Middle Harbour. Because Tunks Park is at the bottom of a valley and partially enclosed by bushland, it has several short, easily navigable bushwalking trails that lead up to Naremburn to the west and Northbridge to the east. A skatepark and youth plaza is also scheduled to be completed soon.

Cricket and golf are both well represented with the Cammeray Cricket Club and Cammeray Golf Club. Cammeray Golf Course is a nine-hole course that is situated between Cammeray Road and the Warringah Freeway. Situated near the golf course is a tennis club and soccer field where the local junior soccer team, the North Sydney Bears, practice.

Cammeray also has a mixture of social focal points, including the ANZAC Club (closed on 31 December 2010) and the North Sydney Leagues Club.

Cammeray Marina is on Cowdroy Avenue and fronts Long Bay. The Marina was established in 1890 and has been operated by the Rabbitts family for 2 generations. The Marina has long been popular with long stay international cruising yachts and has good protected deep water moorings.

All content from Kiddle encyclopedia articles (including the article images and facts) can be freely used under Attribution-ShareAlike license, unless stated otherwise. Cite this article:
Cammeray Facts for Kids. Kiddle Encyclopedia.