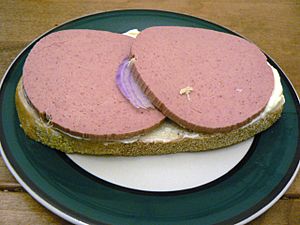 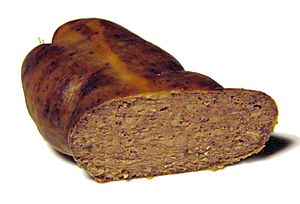 Liverwurst, leberwurst, or liver sausage is a kind of sausage made from liver. It is eaten in many parts of Europe, including Austria, Bulgaria, Croatia, the Czech Republic, Denmark, Finland, Germany, Hungary, Latvia, the Netherlands, Norway, Poland, Romania (especially in Transylvania), Russia, Serbia, Slovakia, Slovenia, Sweden, Ukraine, United Kingdom; it is also found in North and South America, notably in Argentina and Chile.

Some liverwurst varieties are spreadable. Liverwurst usually contains pigs' or calves' livers. Other ingredients are meat (notably veal), fat, and spices including ground black pepper, marjoram, allspice, thyme, ground mustard seed, or nutmeg. Many regions in Germany have distinct recipes for liverwurst. Adding ingredients like pieces of onion or bacon to the recipe make each variety of liverwurst very important to cultural identity. For example, the Thüringer Leberwurst has a Protected Geographical Status throughout the EU. Recently, more exotic additions such as cowberries and mushrooms have gained popularity.

The word "liverwurst" is a partial calque of German Leberwurst 'liver sausage', and "liver sausage" a full calque. 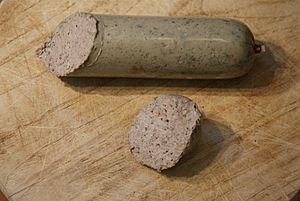 Liverwurst from the Rhineland-Palatinate in Germany

In some parts of Germany, liverwurst is served sliced on a plate, often with mustard or pickled cucumber. It is most commonly eaten spread on bread, as it is very soft.

In Hungary, liverwurst is customarily served on open sandwiches, or with cheese as a filling for pancakes which are baked in the oven.

In Romania liverwurst is called lebar, but unlike the German sausage leberwurst that uses beef, the lebar uses only pork. Lebar is eaten mainly for the winter holidays. It tastes fragrant and sweet with liver pâté. It is generally used as Christmas Eve dinner, sliced on bread with mustard and murături.

Liverwurst is typically eaten as is, and often served as traditional or as open-faced sandwiches. It is popular in North America with red onion and mustard on rye or whole grain bread. In the Southern US, and the Midwestern US, liverwurst is served with slices of sweet pickles (gherkins pickled with sugar, vinegar, and mustard seeds). In the Northeast US, liverwurst is served with dill pickles (gherkins pickled with salt and dill).

In the Midwestern United States, liverwurst is also known as liver sausage or Braunschweiger. Liverwurst is typically served on crackers or in sandwiches. It is often sold pre-sliced.

Pasztetowa is made using calf's liver. It is often served on rye bread with horseradish-style mustard. Pasztetowa is popular throughout the year, but is most frequently served at Christmas and Easter.

All content from Kiddle encyclopedia articles (including the article images and facts) can be freely used under Attribution-ShareAlike license, unless stated otherwise. Cite this article:
Liverwurst Facts for Kids. Kiddle Encyclopedia.