Liver and onions facts for kids 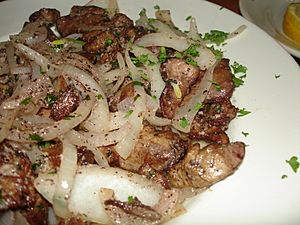 Chicken livers and onions served at a restaurant 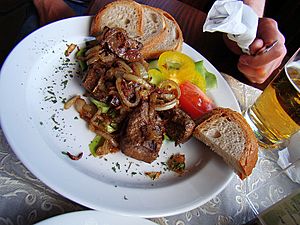 Liver and onions is a dish consisting of slices of liver (usually pork, beef or, in the United Kingdom, lamb) and bulb onions; onion is favoured as an accompaniment to liver as the sharp flavour of onion "cuts" the somewhat metallic flavour of liver, which can be off-putting to some eaters. The liver and the onions are usually fried or otherwise cooked together, but sometimes they may be fried separately and mixed together afterwards. The liver is often cut in fine slices, but it also may be diced.

Liver and onions is widely eaten in the United Kingdom and in Germany, where it is usually eaten along with boiled or mashed potatoes. Calf's or lamb's liver are the usual choices in the UK and is often accompanied by fried bacon.

In the French traditional recipe the liver is fried with butter and bacon. In Catalan cuisine olive oil is used, instead of butter, and fried garlic is added to the mixture. In Italian cuisine, the fegato alla veneziana ("Venice-style liver") recipe includes a dash of red wine or vinegar and the fegato alla romana ("Rome-style liver") a dash of white wine and is cooked in lard.

In the United States, liver and onions enjoyed widespread popularity during the 20th century. However, organ meats such as liver are rarely consumed today. The dish can still be found on the menus of retro diners and American home-style restaurants. It is especially common in the regions of Pennsylvania and the Midwest with a strong German culture, although there is nothing exclusively German about the dish.

Beef liver and onions is still widely popular in Latin America (Spanish: hígado (de res) encebollado, Portuguese: fígado (bovino) acebolado), where it is often eaten along with tortillas or rice. In Brazil, the traditional recipe calls for potatoes or other root vegetable, prepared most commonly boiled and puréed or as home fries.

There are variants of this dish using chicken and lamb livers. These are popular in Spain, among other countries.

All content from Kiddle encyclopedia articles (including the article images and facts) can be freely used under Attribution-ShareAlike license, unless stated otherwise. Cite this article:
Liver and onions Facts for Kids. Kiddle Encyclopedia.