Mashed potato (British English) or mashed potatoes (American English and Canadian English), colloquially known as mash, is a dish prepared by mashing boiled, peeled potatoes. Cream, butter and garlic are frequently used in preparation and it is frequently whipped at the end. The dish is usually a side dish to meat and/or vegetables. The closely related smashed potatoes dish is made with unskinned potatoes and it is hand mashed and not whipped.

In the US, the dish is commonly associated with holidays such as Thanksgiving and Christmas. In Canada and the UK, the dish is more commonly enjoyed throughout the year. Recipes for making the dish started appearing in 1747 with an entry in The Art of Cookery by Hannah Glasse. Dehydrated and frozen mashed potatoes are available in many supermarkets.

Mashed potato may be used as an intermediary ingredient for other dishes such as dumplings and gnocchi, in which case the potatoes may be baked or boiled, and may or may not have dairy or seasoning added.

The use of "floury" types of potatoes is recommended, although "waxy" potatoes are sometimes used for a different texture. There are a multitude of "floury" types, but the most commonly known include russet, golden wonder, and red rascal potatoes. Butter, vegetable oil, milk and/or cream are usually added to improve flavour and texture, and the potatoes are seasoned with salt, pepper, and any other desired herbs and spices. Popular ingredients and seasonings include: garlic, cheese, bacon bits, sour cream, crisp onion or spring onion, caramelised onion, mustard, horseradish, spices such as nutmeg, and chopped herbs such as parsley. 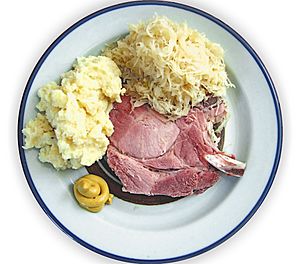 Mashed potato can be served as a side dish, and is often served with sausages in the British Isles, where they are known as bangers and mash. Mashed potato can be an ingredient of various other dishes, including shepherd's and cottage pie, pierogi, colcannon, dumplings, potato pancakes, potato croquettes and gnocchi. Particularly runny mashed potatoes are called mousseline potatoes.

In the United Kingdom, the cold mashed potato is mixed with fresh eggs and then fried until crisp to produce the potato cake. This dish is thought to have originated in Cornwall and is a popular breakfast item. When instead combined with meat and other leftover vegetables, the fried dish is known as bubble and squeak.

A popular accompaniment to mashed potatoes in the United States is gravy. The most common forms of gravy paired with mashed potatoes are beef gravy or turkey gravy, though vegetable gravy is becoming more common as the vegetarian and vegan trends see a rise in popularity.

A potato masher is a utensil which can be used to prepare the potatoes, as is a potato ricer. They may also be whipped with an electric hand mixer, or with sufficient boiling, can be mashed effectively with a durable wooden spoon and brute force.

All content from Kiddle encyclopedia articles (including the article images and facts) can be freely used under Attribution-ShareAlike license, unless stated otherwise. Cite this article:
Mashed potato Facts for Kids. Kiddle Encyclopedia.