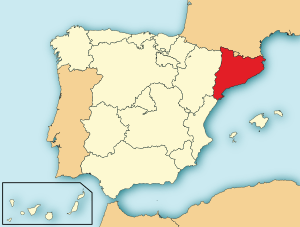 Location of Catalonia in Spain 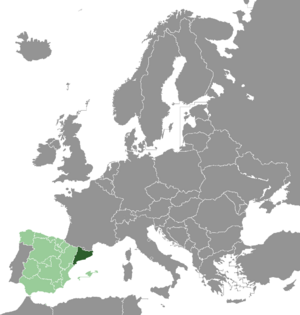 Location of Catalonia in Spain and Europe. The majority of the Catalan territory is part of the Mediterranean Basin, and its cuisine mainly belongs to the culinary tradition of this area

Catalan cuisine is the cuisine from Catalonia. It may also refer to the shared cuisine of Roussillon and Andorra, the second of which has a similar cuisine to that of the neighbouring Alt Urgell and Cerdanya comarques and which is often referred to as "Catalan mountain cuisine". It is considered a part of western Mediterranean cuisine.

There are several Catalan language cookbooks from the Middle Ages that are known to modern scholars. The Llibre de Coch [es] (1520) was one of the most influential cookbooks of Renaissance Spain. It includes several sauce recipes made with ingredients such as ginger, mace powder (flor de macis), cinnamon, saffron, cloves (clauells de girofle), wine and honey. Salsa de pagó took its name from the peacock (Catalan: el paó) that it was intended to be served with, but could accompany any type of poultry, and was part of the medieval Christmas meal. Salsa mirraust (or mirausto alla catalana as it's called in the Cuoco Napoletano) was half-roasted (mi-raust) poultry that was finished in a salsa thickened with egg yolks, toasted almonds and breadcrumbs. In the version of the recipe from the 14th-century Llibre de Sent Soví [ast], the sauce is thickened with mashed poultry liver instead of egg yolks.

Hippocras (pimentes de clareya) was spiced wine made with cinnamon, cloves, ginger, pepper, honey and wine pressed through a manega, a pastry bag shaped cloth that was originally designed by Hippocrates to filter water.

Traditional Catalan cuisine is quite diverse, ranging from pork-intensive dishes cooked in the inland part of the region (Catalonia is one of the main producers of swine products in Spain) to fish-based recipes along the coast. These meat and seafood elements are frequently fused together in the Catalan version of surf and turf, known as mar i muntanya. Examples include chicken with lobster (pollastre amb llagosta), chicken with crayfish (pollastre amb escarmalans), and rice with meat and seafood (arròs mar i muntanya).

The cuisine includes many preparations that mix sweet and savoury and stews with sauces based upon botifarra (pork sausage) and the characteristic picada (ground almonds, hazelnuts, pine nuts, etc. sometimes with garlic, herbs, biscuits). 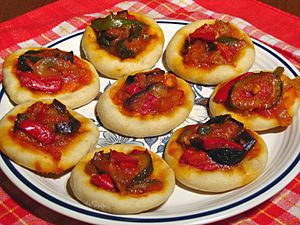 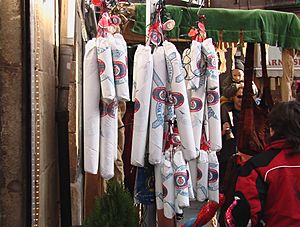 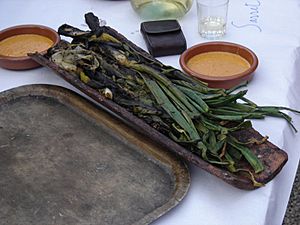 Calçots with Romesco sauce for dipping 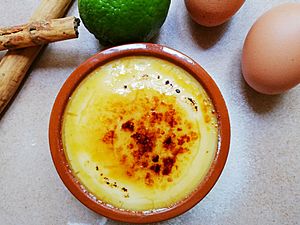 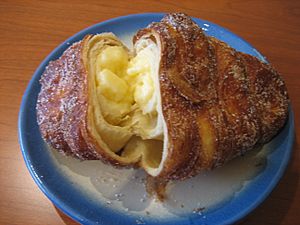 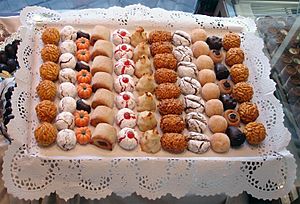 A tray of panellets, as they are typically served 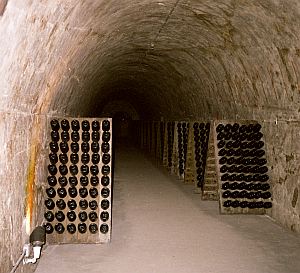 The sparkling wine cava, made mainly in the Penedès and Anoia regions, is the Catalan equivalent to champagne. It is widely exported.

"Moscatell" (Empordà), is a sweet Catalan wine which have similar varieties in other countries such as France, Italy, Portugal, Albania, Slovenia, Greece, Romania and Turkey, as well as other regions of Spain. However, Catalan moscatell is thicker than French muscat and is not drunk before the meal (aperitiu) but after it, either with or after dessert.

Some Catalan authors, such as Josep Pla, Jaume Fàbrega or Eliana Thibaut i Comalada, and others like Colman Andrews, have suggested that, besides Catalonia proper, this cuisine takes in the Balearic and Valencian cuisines, but this opinion is challenged as politicised, and is not widespread, nor is it supported by either the Balearic or the Valencian government, while the Catalan government itself provides divergent points of view. In any case, mutual ties do exist between Catalan gastronomy and other western Mediterranean gastronomies, such as Balearic cuisine, Valencian cuisine, Southern French cuisine, Aragonese cuisine or Murcian cuisine. 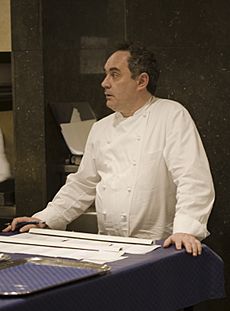 Ferran Adrià was the head chef of El Bulli

Catalan cooks and chefs are widely renowned and critically acclaimed all over the world. Three of The World's 50 Best Restaurants are in Catalonia, and four restaurants have three Michelin stars. Barcelona has nine Michelin stars including Cinc Sentits and has been chosen as the best gastronomical city by the American TV network MSNBC in 2009, topping the list of the ten best gastronomical cities in the world. In Province of Girona are two of the best restaurants of the world, El Celler de Can Roca, the best of the world in 2014 and 2015, and elBulli, in Roses, the best one in 2002, 2006, 2007, 2008, 2009 and 2nd in 2010, before its closure, in 2011.

All content from Kiddle encyclopedia articles (including the article images and facts) can be freely used under Attribution-ShareAlike license, unless stated otherwise. Cite this article:
Catalan cuisine Facts for Kids. Kiddle Encyclopedia.