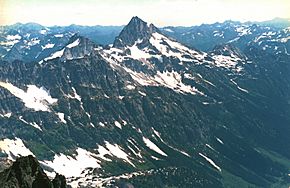 Goode Mountain is one of the major peaks of the North Cascades in the U.S. state of Washington. Named for topographer Richard U. Goode of the USGS, it is the highest peak located in North Cascades National Park, between the Skagit River and Lake Chelan. It is the fourth-highest non-volcanic peak in Washington, and the twelfth-highest summit overall.

Goode Mountain is a massive mountain, rising over 6,000 feet (1,800 m) from its footings, and almost 7,000 feet (2,100 m) from the bottom of Bridge creek valley. The mountain is made up of one main peak, and two smaller sub-peaks, The West Tower, and southeast peak. Both are over 8,700 feet (2,700 m). On the northeast side it accomplishes this rise in only 1.6 horizontal miles (2.6 km). However, due to its isolated location in the rugged North Cascades, it is not visible from any major road. Goode Glacier is also located on the northeast slopes of the mountain, in addition to many small snowfields located at higher elevations. Other major features of the mountain are Greenview Lake elevation 5,455 feet (1,700 m), Memaloose Ridge over 7,200 feet (2,200 m), and Goode Ridge 7,640 feet (2,300 m).

The mountain was first climbed in 1936 via the Southwest Couloir/Southeast Ridge Route, which is still the least technical route. More popular now is the Northeast Buttress, pioneered by well-known climber Fred Beckey and Tom Stewart on August 6, 1966. It involves some snow, possible ice, and rock climbing up to class 5.5. One of the most impressive routes is The Megalodon Ridge first ascent was September 6, 2007 by Blake Herrington and Sol Wertkin. A IV+ 5.10 route, along a ridge over 5,000 feet (1,500 m) feet long, which took 12 hours to ascend by Blake Herrington and Sol Werkin. The route has 4,000 feet (1,200 m) to 5,000 feet (1,500 m) of exposure, it's considered one of the toughest established routes on the mountain.

All content from Kiddle encyclopedia articles (including the article images and facts) can be freely used under Attribution-ShareAlike license, unless stated otherwise. Cite this article:
Goode Mountain Facts for Kids. Kiddle Encyclopedia.