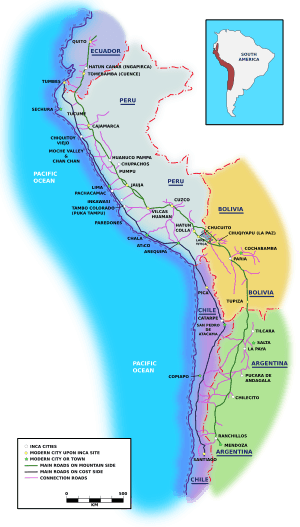 The Inca road system (El Camino Inca) of Peru was the most extensive among the many roads and trails that were constructed in pre-Columbian South America.

It went across the Andes mountains and reached heights of over 5,000 m (16,500 feet) above sea level. The Inca road system covered approximately 22,500 kilometres (14,000 mi) and provided access to over three million km² of territory.

Because the Incas did not make use of the wheel for transportation, and did not have horses until the arrival of the Spanish in Peru in the 16th century, the trails were used almost exclusively by people walking, sometimes accompanied by pack animals, usually the llama.

The trails were used by the Inca people as a means of relaying messages, carried via knotted-cord quipu and by memory; and for transporting goods. Messages could be carried by runners covering as much as 240 km (150 mi) per day, working in relay fashion much like the Pony Express of the 1860s in North America.

There were approximately 2,000 inns, or tambos, placed at even intervals along the trails. The inns provided food, shelter and military supplies to the tens of thousands who traveled the roads.

The most important Inca road was the Camino Real, as it is known in Spanish, with a length of 5,200 km (3,230 mi). It began in Quito, Ecuador, passed through Cusco, and ended in what is now Tucumán, Argentina. The Camino Real went across the mountain ranges of the Andes, with peak altitudes of more than 5,000 m. El Camino de la Costa, the coastal trail, with a length of 4,000 km (2,420 mi), ran parallel to the sea and was linked with the Camino Real by many smaller routes. 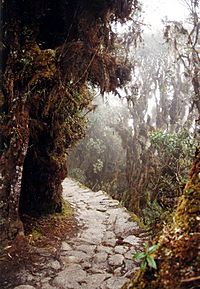 By far the most popular of the Inca trails for trekking is the Capaq Nan trail, which leads from the village of Ollantaytambo to Machu Picchu, the so-called "Lost City of the Incas". There are many well-preserved ruins along the way, and hundreds of thousands of tourists from around the world make the three- or four-day trek each year, accompanied by guides.

The Inca Trail to Machu Picchu is actually three routes, which all meet up near Inti-Pata, the 'Sun Gate' and entrance to Machu Picchu. The three trails are known as the Mollepata, Classic and One Day trails, with Mollepata being the longest of the three. Passing through the Andes mountain range and sections of the Amazon rainforest, the Trail passes several well-preserved Inca ruins and settlements before ending at the Sun Gate on Machu Picchu mountain. The two longer routes require an ascent to beyond 12,000 ft (3,660 m) above sea level, which can result in altitude sickness.

All content from Kiddle encyclopedia articles (including the article images and facts) can be freely used under Attribution-ShareAlike license, unless stated otherwise. Cite this article:
Inca road system Facts for Kids. Kiddle Encyclopedia.