Wharton ( HWOR-tən) is a city in Wharton County, Texas, United States. This city is sixty miles southwest of Houston. The population was 8,832 at the 2010 census. It is the county seat of Wharton County and is located on the Colorado River of Texas just south of U.S. Highway 59 (Future Interstate 69).

U.S. Route 59 (US 59) (Future Interstate 69) (Future I-69) passes through the west side of Wharton. To the northeast on US 59 (Future I-69) is Rosenberg in Fort Bend County while El Campo in Wharton County is to the southwest. State Highway 60 (SH 60) passes through Wharton, heading south to Bay City and north to East Bernard. FM 102 starts on SH 60 in Wharton and goes northwest to Eagle Lake in Colorado County. FM 1301 also begins at SH 60 in Wharton and goes southeast to Boling-Iago. The Colorado River flows toward Wharton from the northwest and after passing through the city, the river's direction is more to the south.

The climate in this area is characterized by hot, humid summers and generally mild to cool winters. According to the Köppen Climate Classification system, Wharton has a humid subtropical climate, abbreviated "Cfa" on climate maps.

There were 3,539 households out of which 31.5% had children under the age of 18 living with them, 44.2% were married couples living together, 15.7% had a female householder with no husband present, and 35.9% were non-families. 31.8% of all households were made up of individuals and 15.3% had someone living alone who was 65 years of age or older. The average household size was 2.51 and the average family size was 3.21.

The area now known as Wharton was part of the Caney Run mail route established by the Republic of Texas in 1838. The community was named after two leaders in the struggle for Texas independence, brothers John and William Wharton. The plantation community was first settled in 1846 by some of Stephen F. Austin's original colonists, and a post office was established in 1847. The first lieutenant governor of Texas, Albert Horton, was an early settler. Land for the courthouse square was donated by William Kincheloe and surveyed by Virgil Stewart and William J. E. Heard. Early settlers came from Alabama, Kentucky, Virginia, Georgia, and Mississippi. 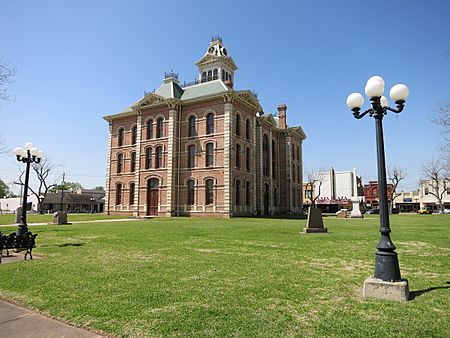 Wharton's economy is dependent on the county government. This photo shows the county courthouse from Fulton Street.

Jewish immigrants, arriving as early as the 1850s, established additional businesses and began the Congregation Shearith Israel (Texas), the only synagogue in a three-county area. Other settlers in the community included Swiss, German, Mexican, and Czech immigrants and descendants of plantation slaves.

Early crops included potatoes, cotton, corn, rice, and sugar cane, and commercial enterprises included cattle, molasses, and sugar. At different times the community had a cotton oil mill, a sugar cane factory, gristmills, cotton gins, a milk processing plant and dairy, an ice plant, and numerous other industries. Oil and sulfur production in the outlying areas contribute to the town's economy. The population of Wharton was about 200 in the early 1880s. 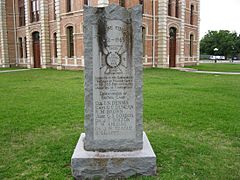 Wharton was incorporated in 1902, when most of the structures were of wood construction. A major fire on December 30 of that year destroyed a number of frame business buildings. Afterwards, businessmen and the city government were convinced to use brick construction with fire walls for all buildings within the city limits and to construct a water system with fire hydrants. A free library was established in 1902 by the New Century Club and adopted by the city in 1904. In 1935 the majority of the library inventory was given to the Wharton Public School. The first public park was dedicated in 1913, and the Wharton Chamber of Commerce organized in 1919.

The city experienced its greatest growth during the 1930s, increasing from 2,261 in 1930 to 4,386 in 1940. Wharton Little Theatre was organized in 1932, and Wharton County Junior College was established in 1946. The town's population reached 5,734 in 1960 and 7,881 in 1970. A community concert series was developed in the 1960s. By the 1980s Wharton had such diverse industries as Health-focus, the largest physical rehabilitation and therapy service in the nation; M. I. Drilling Fluids, a subsidiary of Magcobar Division of Dresser Industries; the Formosa Plastics Group, consisting of Nan Ya Plastics and J-M Manufacturing; Coastal Warehouse Limited, serving the agricultural industry; and Gulf Coast Medical Center and South Texas Medical clinics. The economy was also heavily dependent on the presence of the county government.

In the 1980s Academy Award–winning screenwriter Horton Foote, a descendant of Lieutenant Governor Horton, lived in Wharton. The Wharton County Historical Museum features exhibits on Dan Rather and Medal of Honor recipient Roy Benavidez as well as a wildlife collection. The Wharton population was stable at the end of the twentieth century: 9,033 in 1980, 9,011 in 1990, and 9,237 in 2000. The 2010 census reported a decrease to 8,832.

All content from Kiddle encyclopedia articles (including the article images and facts) can be freely used under Attribution-ShareAlike license, unless stated otherwise. Cite this article:
Wharton, Texas Facts for Kids. Kiddle Encyclopedia.