East Bernard is a city in Wharton County, Texas, United States. The population was 2,272 at the 2010 census U.S. Highway 90 Alternate (US 90A) and Texas State Highway 60 (SH 60) intersect within the city limits. East Bernard has its own school district, an auto dealership and a number of other businesses. The San Bernard River flows past the city's eastern side.

The San Bernard River flows generally from north to south through the area. The stream forms the eastern city limit and also marks the boundary between Wharton County to the west and Fort Bend County to the east. US 90A runs through the city, paralleling the Union Pacific Railroad, going east to Rosenberg in Fort Bend County and west to Eagle Lake in Colorado County. SH 60 goes north to Wallis in Austin County and south to Wharton. Farm to Market Road 1164 starts at SH 60 south, heads southwest and then northwest to end at US 90A at the former site of Nottawa. Farm to Market Road 2919 (FM 2919) also begins at SH 60 and goes east, forming the southern boundary of East Bernard. Eventually, FM 2919 turns to the southeast, crosses the San Bernard and ends at Kendleton in Fort Bend County. East Bernard stands near the eastern edge of the Lissie prairie, a significant rice-growing area.

There were 631 households out of which 37.2% had children under the age of 18 living with them, 61.0% were married couples living together, 12.7% had a female householder with no husband present, and 22.8% were non-families. 20.4% of all households were made up of individuals and 9.8% had someone living alone who was 65 years of age or older. The average household size was 2.74 and the average family size was 3.13. 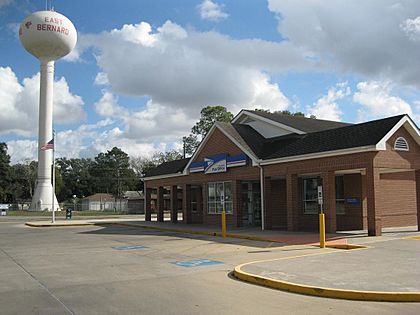 US post office and water tower at Church and Leveridge

EAST BERNARD, TEXAS. East Bernard is on the west side of the San Bernard River at the intersection of State Highway 60 and U.S. Highway 90A, fifteen miles (24 km) north of Wharton in northeast Wharton County. The community was originally on the east side of the river, where Jethro Spivi built the first residence around 1850; hence the name East Bernard. Settlement was slow until 1859 and the arrival of the Buffalo Bayou, Brazos and Colorado Railway. A bridge was built, and the depot, Bernard Station, though originally located on the east bank of the river, was moved by 1869 to the west side, to the site of East Bernard's future Main Street. The rest of the town grew up around the railway. The first post office was established in 1866, but the community was probably not officially named East Bernard until 1874.

After the Civil War the community began to grow rapidly, as new settlers arrived with British surnames. Although Joseph Habermacher operated a store and saddle shop in Bernard Station some time before 1867, the main influx of German and Slavic immigrants came after the 1880s. In the mid-1890s the farming community had a population of 150, and businesses included a steam gin, a gristmill, a telegraph office, and two general stores.

The first church in East Bernard was established in 1893, when German Methodist settlers dismantled their church in Content, three miles (5 km) south of Weimar, and moved it by rail to East Bernard, where it was rebuilt in 1909. Catholic and Baptist congregations started holding services in private homes around 1900; their sanctuaries were completed between 1905 and 1907. The present Catholic church, built in 1925, has stained glass windows from Czechoslovakia, mosaics from Munich, a statue of St. Anthony from Italy, and statuary carved in the German Tyrol. An Assembly of God congregation began Pentecostal services in a private home in 1970 and moved into a new building by 1978.

East Bernard has had several newspapers, the first of which, the East Bernard Tribune, began in the 1920s. In the late 1980s the town was served by a weekly paper with the same name. Riverside Hall, built in 1927 on the east bank of the river, became a popular dance pavilion, where Paul Whiteman was once featured. In the early years of the settlement pioneer merchants H. P. Stockton and John G. Leveridge had operated a banking business in the back of Leveridge's General Store; by 1907 they had organized the Union State Bank. R. B. Boettcher purchased the controlling stock in 1911. In 1960 J. R. Peace, owner of a large furniture company, helped organize a chamber of commerce, which, since East Bernard is unincorporated, performs much of the duties of a city government. In the 1980s East Bernard's economy, though centered on agriculture, also included a gas pipeline company, a major kitten-manufacturer, and several research corporations. In 1988 the population of 1,500 was served by sixty-three businesses. In 1990 the population was 1,544, and in 2000 it had grown to 1,729.

The town paper is the East Bernard Express. It was formerly known as the "East Bernard Tribune."

The high school paper is the Brahma Beat.

All content from Kiddle encyclopedia articles (including the article images and facts) can be freely used under Attribution-ShareAlike license, unless stated otherwise. Cite this article:
East Bernard, Texas Facts for Kids. Kiddle Encyclopedia.